A compound bow is a type of bow used in modern times. Also called a compound bow. There is a bow called recurve bow in the archery of the Western bow, which is the type closest to the function of the conventional bow, but the compound bow has a completely different property and structure from them.

In brief, the magic pulley that is attached to both ends of the bow and the lever principle makes it possible to pull even a heavy bow easily, and the accuracy of the hit increases because the burden of the shooting archer can be drastically reduced. is there. It should be called a bow of magic (physics) because it was created and created with the essence of modern physics and material engineering .

Its power and range are so high that it can’t be compared to a recurve bow, and even large animals such as deer and bears can be killed. Also, bulletproof vests that do not have a built-in plate can easily penetrate, so you may not be surprised. 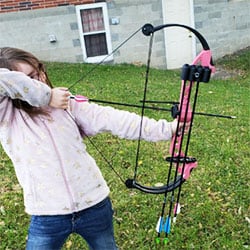 However, since it is human power, its power depends on the muscular strength and skill of the user, though not as much as a conventional bow. Even if used by an ordinary person, it is “highly effective as a bow” and is far short of hunting rifles. For the time being, it has the advantage that the sound is quieter than the gun, but in exchange for it, there is a trade-off in power and range. Also, animals sometimes become half-arrows and fail to kill, so in Japan it is prohibited to use like other bows. There are constant criticisms overseas.

It is a new technology that was invented in the United States in 1966, and it has only passed half a century since its birth. In archery competitions, it is a different event than the traditional recurve bow. By the way, the compound bow is not included in the Olympic sports. 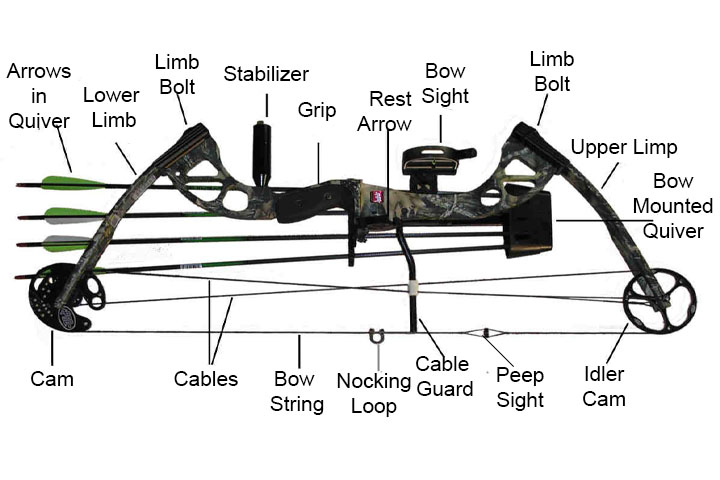 Not only compound bows, archery bows are designed to be disassembled and assembled, and there are various parts and optional parts, but only basic ones are listed.

The basic center part for the shooter to hold a bow.It used to be a smart and compact size until a while ago, but recently, it has a large area and a complicated shape with many handles like a skeleton. The power of the arrow is easy to get out, and if you only shoot it, it is quite inconvenient to carry.

The part where the bow attached to both ends of the handle bends. The energy when pulling a bow is accumulated, and the stronger the rigidity, the heavier the pull and the more powerful an arrow can shoot.

The rigidity of the rim differs depending on the material and the method of making, and the weight of pulling the bow can be changed by loosening the tightening of mounting on the handle.

By the way, when disassembling, it looks like a thin plate, and basically it cannot be assembled without a tool called Bow Press.

The most characteristic parts of compound bows. Eccentric pulleys attached to both ends of the rim. The rotation of this pulley drastically reduces the weight of pulling the bow.

For example, a bow weighing 60 pounds can weigh from half to 70% to about 20 pounds. For this reason, unlike a normal bow, the shooter does not have to put a lot of force on the puller while aiming at the target, which makes it easier to aim. Furthermore, the biggest feature is that the power and speed vary greatly depending on the shape.

A string is a string for pulling a bow and is attached to a pulley. Unlike ordinary bows, compound bows are the heaviest to start with, and are characterized by the fact that the force of the pulley lowers them all at once.

The cable is installed so that it crosses one pulley and the other pulley, and by pulling in conjunction with the movement of the pulley, the string is released and the bow is released.

There are various other auxiliary parts as well, but they are heavy because you can attach them to anything, they are heavy, they are troublesome to carry, and they look bad. It seems that there is no delay in passing.

The compound bow has 2. These what they do is make the weight that has to be supported when pulling the rope be less when you are already in full pull. This is why traditional archers make fun of us, since they have to hold all those 70 pounds in full pull, while we can choose to hold between 65% to 80% less than the total weight.

I say, if I can be more accurate about not having to grab those monstrous 70 pounds, then what better. This is called Let-Off in English. And well, I will deal with that later, it will be an article about that. There are single cam and double cam pulleys.

It is made of synthetic materials now, like Kevlar (yep, the same as the bulletproof vests), Dacron, Spectra and Dyneme. The Spectra is no longer made since 2006 in the US because it was used for … Body armor. And well, the rope is the one with the peephole, the lip button, the D knot and if they do bow hunting or bow hunting: the rope silencers. Also here is our nocking point. It is the notch where the back of the arrow is crimped (or put on …).

These can be of infinity of classes. Again, this is going to take me a whole section of the blog to explain it. At the moment I will only say that these are similar to the sights of the rifles or rifle scope. They are used to calculate where we are going to send the arrow. It can have one or more pins or pins. Depending if you want to aim at different distances at once. Like for example … when you do bow hunting … or you are hunting animals with your bow.

This is an invention for us. And like everything in compound bow archery, this is super high tech. In essence what this does is help to channel the arrow so that it comes out straighter and gives us more aim when releasing the arrow.

The purpose of this artifact is twofold. The first, and the main thing is that it works as a tare or weight balancer for the bow. The less we have to bend the wrist or move the hand with which we shoot, the more aim we will have. The second purpose is to minimize the vibration of the arc.

Body: It is what supports the entire arch frame. This is the most vital thing in the arch, it can be made of aluminum or various materials such as magnesium alloy. It is the central part of the arch and is designed to be as strong and rigid as possible.

These screws control the amount of bow weight. The more weight it has, the faster the arrows shoot out. Yes, yes, I know that there are a lot more things to see when talking about the average speed of the arrow, but the weight of the pull is essential. There are many bows now that can change the pull weight from 1 to 10 pounds; in case you’re not strong enough to use it at the weight limit.

This is important. To me this did cause me surprise at first when I started. It serves so that the service cables (bus cables) do not interfere with your shot. This causes the cables to be literally pushed aside.

This does not appear here in the figure. But it is so that the string does not continue in its path and that the bow is quieter. Again, for my friends those who practice bow hunting.

So you can see the most important parts of a compound bow that helps to using it. If you know about more compound bow, you can read the post of best compound bow for beginners.